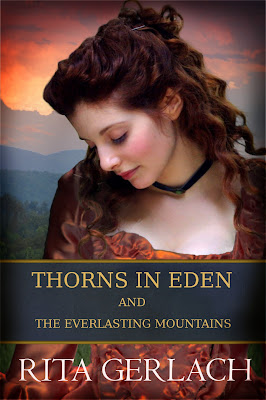 I'm so happy to share my newest book releases with you, 'Thorns in Eden & The Everlasting Mountains' and 'Beyond the Valley', the 3d and final novel in the Daughters of the Potomac Series.

'Thorns in Eden & The Everlasting Mountains' will be released as a 2-in-1 collection in May. You will find love, adventure, and suspense at the start of the American Revolution along the coast of Cornwall and the Maryland frontier.

John Nash, has built a new life in the Maryland frontier, and journeys back to England to see his father before the first shots of the Revolution are fired. Rebecah, a young woman who has known little more than the solitude of an isolated manor has lost her father and is now under the control of a domineering patriarch. As their romance unfolds, they become trapped in the schemes of her uncle and immersed in one of the most infamous Indian wars in Colonial history.


As the firebrands of Revolution grow hot, they marry and work together to build their estate, Laurel Hill. Facing a strange new world, Rebecah experiences the prejudice of being English, but finds friendship and acceptance in the wilds of the Maryland frontier. Joy reins at Laurel Hill when she announces she is carrying a child. Nash, known as Jack, is captain of a band of rangers who protect the frontier families from Indian attack. His friendship with Chief Logan has not prevented the Indian War from reaching their peaceful home along the lush hills of the last outpost.

Can he protect his wife from warring Indians and from a man who has no allegiance to any nation, tribe, or creed, wanted for robbery and murder, who has vowed vengeance? In Thorns in Eden and The Everlasting Mountains, love and faith are the sustaining forces that cannot be overtaken by the vines of adversity.
In EBook:  http://tinyurl.com/mj467oe
Paperback:  http://tinyurl.com/klquv8o

Praise for 'Thorns in Eden & The Everlasting Mountains.


Out of the three in the Daughters of the Potomac series, I have to say 'Beyond the Valley' is my favorite.

If you have read books 1 and 2, you will finally get to read Sarah's story. How did she come to be an indentured servant? What were the circumstances that led her far from her home in Cornwall, England to the wilderness of Maryland, and her meeting the Morgan family?

What happened to Sarah when she walked off stage in book 1? Did she find freedom and the love she so desperately longed for?

When Sarah’s husband Jamie drowns, her young life if shattered and takes a turn that she never expected. Pregnant and now widowed, she reaches out to Jamie’s family for help but they are unwilling. Instead they devise a plan to have her kidnapped and taken to the Colonies to live a life of servitude for seven years.

She is deceived and taken aboard a ship headed for the Colonies to be sold, bound to unspeakable hardship and forced into the same world she left.

Caught in the talons of servitude, she falls in love with a young conscientious doctor, Alex Hutton, who has arrived in Virginia to care for his widowed sister in law and two young nieces. Called back to serve in Washington’s army, he promises he will return for her, gain her freedom and wed her. Other plans were made for Sarah when her owner finds himself bankrupt and sells her the first chance he gets. She’s taken out into the frontier, captured by Indians, and faces unbearable hardship.

When the mistress of River Run along the Potomac encounters Sarah’s plight after she has escaped, Eliza Morgan pities her, and a way is made for Sarah to remain with her and care for Eliza’s young daughter, Darcy. Revolution has ignited in America, and together they endure many hardships which bring them together in friendship. But when Sarah learns that Zachary Halston, a local landowner, has seduced Eliza, she is troubled about what to do.

Grateful for Eliza’s kindness, Sarah is forever bound to keep silent. She promises Eliza to never reveal the secret that Ilene is Eliza’s child, even at the risk of living a life in shame if her master should ever discover the truth upon his return.

Trapped in Eliza and Hayward’s troubled lives, Sarah flees River Run. Will she make her way back to Alex and freedom as he searches the wilderness for her? Or will her hopes be crushed at the hands of the man who deceived her long ago in Cornwall when she faced destitution?

Praise for 'Beyond the Valley'.


Beyond the Valley is a delightful escape of adventure and romance and a sweeping saga of tragedy and hope that you won’t want to miss! (5 Stars)
MaryLu Tyndall, author of the Surrender to Destiny Series

Review in RT Book Reviews Magazine - 4 stars
(Creating characters with intense realism and compassion is one of Gerlach's gifts. Her books typically involve dramatic situations, giving her characters a chance to rise above their adversity. Beyond the Valley is a shining example of that, reminding us that we are never forsaken. This is the third in the Daughters of the Potomac series. Sarah's character was introduced in the first novel, Before the Scarlet Dawn, and now she has her own heart-wrenching story that takes us from England to Virginia and Maryland. The historic setting is vividly descriptive, bringing the story to life, almost becoming a character unto itself. You may shed some tears, but you'll come away with deep contentment and satisfaction of a story well told.) 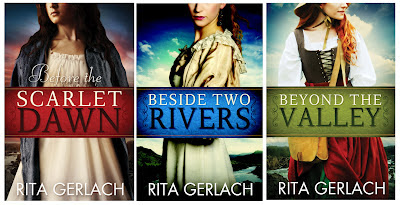 More News! Bestseller on Amazon!
I am happy to announce the release of my inspirational historical romance The Rebel's Pledge in a new and refreshing revised version. In the months of October and November, it made it to the #1 bestseller in free inspirational historical romance ebook for three days in a row on Amazon.
The Rebel's Pledge is available now on Kindle for 2.99 and in paperback for only $11.90. If you would like to share this post on your blog, I would appreciate it so much.

Also coming later this year a two in one collection ~ Revolutionary War drama / romance, Thorns In Eden and The Everlasting Mountains.

Suggested Book of the Month

The Rebel's Pledge - in paperback and Kindle ebook

Creating characters with intense realism and compassion is one of Gerlach's gifts. Her books typically involve dramatic situations, giving her characters a chance to rise above their adversity. Beyond the Valley is a shining example of that, reminding us that we are never forsaken. This is the third in the Daughters of the Potomac series. Sarah's character was introduced in the first novel, Before the Scarlet Dawn, and now she has her own heart-wrenching story that takes us from England to Virginia and Maryland. The historic setting is vividly descriptive, bringing the story to life, almost becoming a character unto itself. You may shed some tears, but you'll come away with deep contentment and satisfaction of a story well told. (Review in RT (Romantic Times) Book Reviews Magazine - 4 stars, compelling page-turner)

From a dear reader...

I loved DAUGHTERS OF THE POTAMAC. I love learning the historical facts you base your stories on. I am always spell bound when reading your books and can't lay them down for even a few minutes till I am done. In school, if history was written in the form of stories the whole class would pass with straight A's. Your new series was well written. I am most impatient to start you new series when it becomes available. I rate this series and your other books a TEN STAR. Oh I know, the stars only go to 5 but this is my way of saying you go off the charts for me.
Keep up your wonderful writing.
Thelma

WOW, this book was everything I like in a book, and more. It was historical fiction, vividly depicting the life of an indentured servant. It was filled with action, that left me racing towards the next page. Romance, or should I say true love that never gave up no matter what life threw at them. Add to that writing that made the whole story come together so smoothly and you have the perfect book, for me. Don't miss this 3rd book in this series. The book is the best of the series, if improvement was possible.
KyDonna